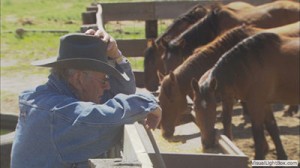 “When I first encountered Dayton Hyde he was living alone on 11,000 acres in the Black Hills of South Dakota, surrounded by the thundering hooves of horses and the music of song birds. His stories of the West and his passion for wildlife captivated me, and I knew I would be back to create a film about a man who found freedom in the horses he is saving. Twenty years later, Running Wild: The Life of Dayton O. Hyde captures the essence of a man who as a cowboy, a poet and an inspiration, has handed his heart over to the West. The film looks back on his rich, diverse life and looks forward to his legacy, opening the eyes of a new generation to the beauty and fragility of what is left of this natural landscape.”